After the massive advances in the development of the electric telegraph, it was now possible to send messages quickly and reliably using land and submarine telegraph cables. However there were still many places to connect and there was still much increasing demand for the telegraph cable network.

Also there was still no transatlantic telegraph cable setup yet; this was due to a number of reasons including:

Another problem the engineers had to face was how to record and amplify messages being sent, all of this would be solved in the next hundred years.

After the repaid expansion of the telegraph due to massive demand for it, in 1851 there were a total of fifty-one telegraph companies in operation.

A Manchester cotton mill merchant, John Pender, became director of the English and Irish Magnetic Telegraph Company. This helped to improve the development of the telegraph and the network because there was more funding available.

John Tyndall proves that light can be sent through a curved stream of water and therefore bent. It is this very experiment which demonstrates how fibre optic cables work, however John Tyndall probably never thought that his discovery would lead to very fast, high capacity network that we use today.

The first ever transatlantic cable is laid between Ireland and New England, for the first time it was possible to communicate messages very quickly between the Americas and the UK; however its success was short lived because the cable snapped.

The Morse Inker was invented to allow messages sent in Morse code to be recorded. This meant that messages could be recorded to be retransmitted without an operator having to receive and write it down manually.

However it had the limitation that it was not very sensitive to the weak signals from the long distance cables. To solve this problem Lord Kelvin’s mirror galvanometer was used instead as it was far more sensitive; however it had the drawback that it had to be manned for someone to take down the messages.

The problem with accurately recording the long distance messages accurately was eventually solved with the invention of The Thomson Siphon Recorder. It was very sensitive and therefore allowed messages from long distances to be accurately taken down; making the whole process much easier and efficient.

The first successful transatlantic cable was laid using a special ship designed by Brunel called The Great Eastern cable laying ship. A special ship was required because no other ship was able to take the immense weight of the cables of a suitable thickness of armour cable to protect the copper cable in the middle. This meant a much tougher therefore more reliable cable could be laid, which was previously not possible.

Brunel’s ship was used again the lay a new line from Bombay to Porthcurno, England. Porthcurno would later go on to become the largest and most important telegraph station and the hub of what would become Cable and Wireless’s communication empire for many years.

Pender merged all of his many telegraph companies to create The Eastern Telegraph Company; it was the first global company of its kind.

Alexander Graham Bell acquires a patent for the electric telephone. This is the start of the transition from the telegraph to the telephone which would make communication easier and available to even more people.

Catford Strowger Switch - The First of it's Kind in the UK

Almon B. Strowger invents the first useful electromechanical automatic telephone exchange system. This technology was commercially used in the UK until 1995. At first it wasn't too popular because female labour was cheap and the cost of the equipment was very expensive, however running long distance calls using operators was a laborious process. Back in the early days of the telephone network, it was far less busy than it is now and therefore was much simpler to manually operate. As more people got telephones and female labour became less cheap, the need for automated systems grew and Strowger exchanges were rolled out more extensively.

The Eastern Telegraph Company has approximately 150,000kmi of submarine cables in its network. 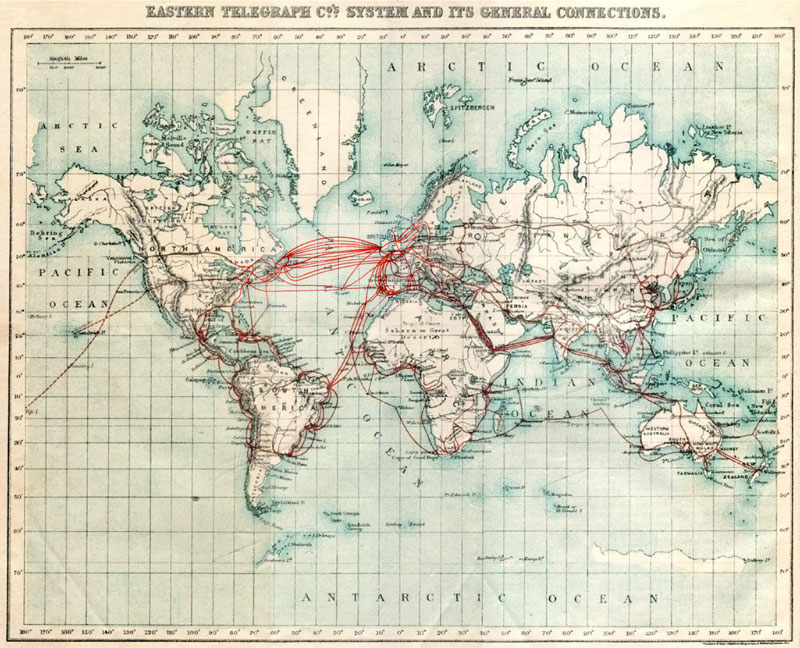 Marconi is the first to successfully wirelessly communicate between Cornwall and Newfoundland. This is the start of the wireless communication that eventually poses a serious threat to the cable based communication. However at this time it still was a very unreliable form of communication.

Later the wireless communication gets much more reliable and starts to pose a much greater threat to the wired communication for the following reasons:

However it did have one massive problem which was anyone could listen into the radio waves into the messages being sent, which made it more insecure that the cable telegraph. Wireless networks still have this problem today; however it is much safer than the first wireless networks as they are often now encrypted.

Wireless and wired telegraphies were used for communication in WWI, the Porthcurno telegraph station was used to censor and transmit information for the war effort. It was a much quicker an efficient system for communicating with the army than waiting for written messages to arrive.

Marconi is the first to telephone Australia using radio waves; he later gets contracts from the Post Office to setup wireless telegraphy circuits to other countries as well as Australia. This is the time when the wireless telegram starts to pose a serious threat to the future success of the wired telegraph industry. The two industries are competing madly with each other for custom and this is causing lots of problems for businesses wanting to send messages.

To help automate the process of sending telegrams a regenerating system was created which would receive messages and relay them onto their next destination. This caused lots of jobs to be lost as much fewer employees were now required in the relay stations such as Porthcurno. However it was a lot quicker and the machines also translated the Morse Code back into the alphabet automatically for the operator at the other end.

This new system also meant that messages could be sent using a keyboard perforator. This was a device which worked much like a typewriter, but instead of printing letters on to paper, it punched holes into a paper ribbon which represented Morse Code. This paper ribbon would then be fed into the auto transmitter and the message would be sent. This meant that anyone who knew how to type could use the system without knowing Morse Code.

The Eastern Telegraph Company is merged with the Wireless Telegraph Company to form The Imperial and International Communications Company as a result of a government order. This is because of the trouble caused by the rivalry of the two different systems. Now there was no more rivalry it was possible for the best method of communication (wired or wireless) to be selected depending on the requirements of the project they were undertaking. Previously when they were both rivals this did not happen and the best form of communication was not always chosen.

Imperial and International Communications was renamed Cable and Wireless Limited.

The world's first around the world telephone call using radio and cable happens. The dominance of the telegraph over the telephone is shift.

In 1940 the UK government was very concerned about the security of the telecommunications of its country during WWII. They had big problems with having the main centre in London because it was continually getting bombed. So they decided to create and underground head quarters next to the main relay station in Porthcurno. It was bomb as gas proof and housed all of the vital communications equipment that was required to receive the communications throughout the duration of the war.

Also during the war, like many things, there was limited space for civilian messages in the telegraph system. So they came up with a set of codes which represented different phrases, this significantly reduced the length of the messages and meant that more could be transmitted in the limited capacity available.

A telephone submarine cable is laid across the English Channel. This meant that it was possible for people from England and France to talk to each other long distance, without having to book a slot with an operator, like they had to previously.

Cable & Wireless is nationalised and becomes part of the Post Office.